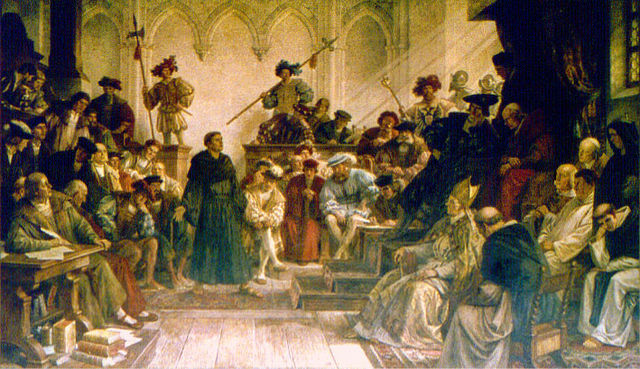 In the months leading up to the Constitutional Convention in Philadelphia in 1787, James Madison carefully studied ancient confederacies so as to learn from their failures and improve upon their defects. He published his critique of the Holy Roman Empire in The Federalist essay number 19, co-authored by Alexander Hamilton.

The Holy Roman Empire was a union of kingdoms in Western, Northern and Southern Europe. It arose in the Early Middle Ages and lasted over eight centuries until its dissolution after the Napoleonic Wars. The Holy Roman Empire was initially under the nominal authority of one “emperor,” who claimed the right to rule as the heir of the emperors of Rome.  Eventually the office became “elected” after political control devolved to the dozens of kingdoms and territories that comprised the union.

Madison’s critique of the Holy Roman Empire focuses on two fundamental defects. The first is a lack of effective executive authority in the confederacy. Though initially under the centralized control of a single sovereign, the “principal vassals” claimed more localized control over the affairs of the union. “In the eleventh century the emperors enjoyed full sovereignty,” Madison writes. “In the fifteenth they had little more than the symbols and decorations of power.” The Emperor did retain certain prerogatives, including a veto power over the resolutions of the legislative body. Two judicial bodies, under control of the emperor, had “supreme jurisdiction in controversies which concern the empire.” From these institutions one might surmise that the supreme executive was extremely capable and efficient in directing the affairs of the union. But real political power in the Holy Roman Empire was vested in a Diet that represented the constituent members of the union.

The lack of an efficient executive had left important matters of security and commerce in the hands of a Diet whose members were deeply divided over local interests. “Military preparations must be preceded by so many tedious discussions, arising from the jealousies, pride, separate views, and clashing pretensions of sovereign bodies,” Madison writes, “that before the diet can settle the arrangements, the enemy are in the field; and before the federal troops are ready to take it, are retiring into winter quarters.” The military forces of the union are “defectively kept up, badly paid, infected with local prejudices, and supported by irregular and disproportionate contributions to the treasury.” This vice has left the confederacy constantly open to the predations of neighboring enemies.

Madison’s second and most important critique of the Holy Roman Empire is a lack of centralized control and effective checks over the member states. In theory, the member states are expected to restrain themselves from infringing upon the duties of the central government and are pledged to obey its authority. As Madison writes,

The members of the confederacy are expressly restricted from entering into compacts prejudicial to the empire; from imposing tolls and duties on their mutual intercourse, without the consent of the emperor and diet; from altering the value of money; from doing injustice to one another; or from affording assistance or retreat to disturbers of the public peace. And the ban is denounced against such as shall violate any of these restrictions.

Sufficient constitutional restraints seem to have been placed on the member states to prevent them from undermining the interests of the whole union. However, as Madison writes: “Nothing would be further from the reality. The fundamental principle on which it rests, that the empire is a community of sovereigns, that the diet is a representation of sovereigns and that the laws are addressed to sovereigns, renders the empire a nerveless body, incapable of regulating its own members, insecure against external dangers, and agitated with unceasing fermentations in its own bowels.” The central authority, in its weakness, had been forced of necessity to rely on local enforcement of the acts and policies of the Diet. “This experiment has only served to demonstrate more fully the radical vice of the constitution,” Madison writes. “Each circle is the miniature picture of the deformities of this political monster. They either fail to execute their commissions, or they do it with all the devastation and carnage of civil war. Sometimes whole circles are defaulters; and then they increase the mischief which they were instituted to remedy.”

The lack of any effective centralized authority to enforce the policies of the Diet reveals the tenuous nature by which the parts of the union remain barely united. This defect is revealed in the nearly constant acts of violence and injustice among the member states. “The history of Germany is a history of wars between the emperor and the princes and states; of wars among the princes and states themselves; of the licentiousness of the strong, and the oppression of the weak,” Madison writes. In sum, the vices of the constitution of the Holy Roman Empire are marked by “general imbecility, confusion, and misery.”

Despite these vices, one might ask, what allowed the Holy Roman Empire to persist for more than eight centuries? Not the constitution and institutions of the union, Madison concludes, but matters that rely more on “accident and force” rather than “reflection and choice.” “They are kept together by the peculiarity of their topographical position,” Madison writes, “by their individual weakness and insignificancy; by the fear of powerful neighbors…[and] by the mutual aid they stand in need of, for suppressing insurrections and rebellions.”

In the following essay we will explore the remedies to these defects that Madison and the framers worked into the Constitution of the United States.

Electoral Structure and Allegiances of the Holy Roman Empire