We had our fourth Patriot Club and had lots of fun learning more about our wonderful Constitution!

While we waited for everyone to arrive, the kids had fun jumping on hay bales that had examples of how to be a good citizen! I was a little nervous planning it, but when the kids arrived, fun happened!  We had five stations, with ten minutes at each one: 2: Bells – they played the song “America” on a child’s set of hand bells. I had the music color coded, so they could play it on the spot.  All ages enjoyed this. 3: Meet Ben Franklin – they learned some great things about the oldest Founding Father. 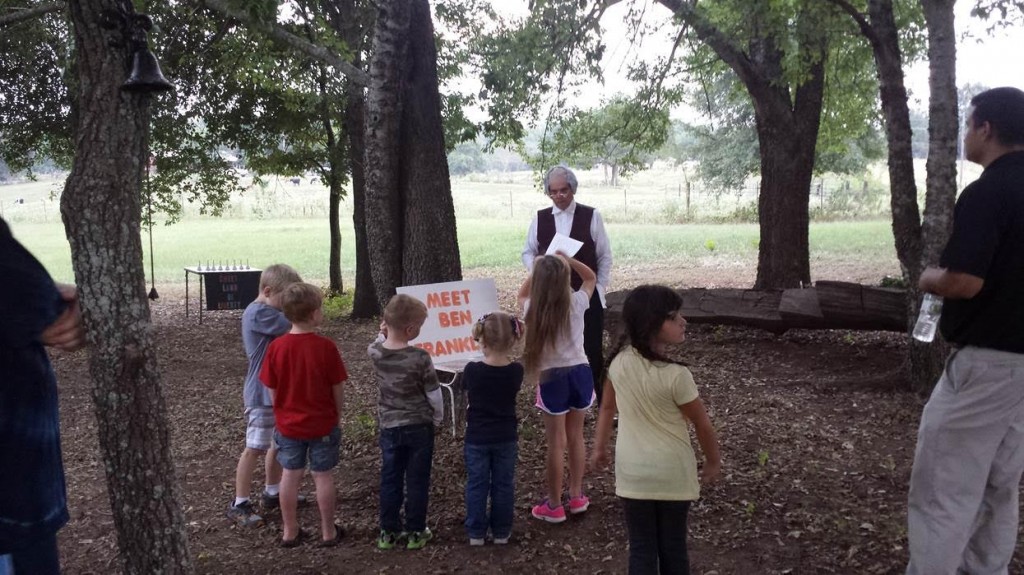 5: Know their names – we played memory with the names of the Founding Fathers. We then had a potluck picnic and a hay ride.  As an end to the night, we had a review candy toss with questions from all of our stations.

All of my parents were eager to man a station or help in any way and the kids were happy playing the games.

I had invited about twenty five kids, but fifteen were able to come.  I will double the invitations next time.  It was a great night and a thrill to see the kids have fun learning!

The ideas just keep coming for future Patriot Clubs!  It was way easier than I thought to get started. -7 years a citizen of the USA

-# of Representatives is based on population (Census) of each State. [ Originally based on the number (#) of FREE PERSONS. Excluding Native Americans, not taxed and 3/5ths of all other persons.

– 9 years a citizen of the USA

-2 Senators per State ELECTED by the PEOPLE

-Each Senator has 1 vote

Senators serve 6 years, but every 2 years 1/3 of the Senate is up for Re-election.

What do they do?

Impeach means Impeachment in the United States is an expressed power of the legislature that allows for formal charges against a civil officer of government for crimes committed in office. The actual trial on those charges, and subsequent removal of an official on conviction on those charges, is separate from the act of impeachment itself.

At the Philadelphia Convention, Benjamin Franklin noted that, historically, the removal of “obnoxious” chief executives had been accomplished by assassination. Franklin suggested that a proceduralized mechanism for removal — impeachment — would be preferable.[1]