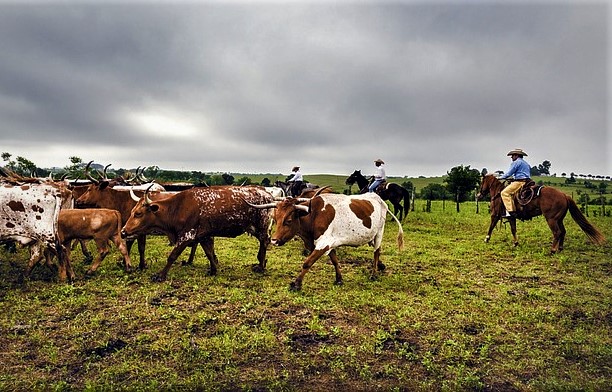 On September 5, 1867, the first Texas cattle were shipped from the railhead in Abilene, Kansas, with most of the livestock ending their destination in a slaughterhouse in Chicago, Illinois. These cattle made a long, none too pleasant journey from south Texas to central Kansas.   Their hardships were shared by cowboys and cattlemen who drove their herds hundreds of miles to find a better market for their livestock. For almost two decades, cattle drives from Texas were undertaken by beef producers who found that the northern markets were much more lucrative than those they had been dealing with back home. These drives ended after a combination of economic, legal, and technological changes made the long drives impractical or infeasible.

After the end of the civil war, much of the economy of the old Confederacy was in shambles. In Texas, the rebels returning home often found their livestock scattered and their ranches and farms unkempt and overgrown. Once the Texas ranchers reassembled their herds, they found that the local market for beef was very limited. The ranchers’ potential customers in the region had little money with which to buy beef and there was no way to transport livestock to distant markets except by ships that sailed off the Gulf coast. The major railroad lines did not reach Texas until the 1870s. Many of the cattlemen were “cattle rich but cash poor,” and it did not appear that there was any easy way to remedy their situation.[1]

Several cattlemen, cattle traders, and cattle buyers developed a solution.   Rather than sell locally, or attempt to transport cattle by water at high costs, cattle were to be driven along trails to railheads up north. Among the first of these was Abilene, Kansas, but other “cow towns,” such as Ellsworth and Dodge City, quickly grew from small villages to booming cities. This trek required very special men, horses, and cattle.   The men who drove the cattle were mostly young, adventurous, hardened cowhands who were willing to work for about $30 per month in making a trek of two months or more. Several Texas-bred horses were supplied for each cowhand to ride, for it was common for the exertions of each day to wear out several horses. The cattle themselves differed significantly from their bovine brethren in other parts of the continent.   These were Texas Longhorns, mostly steers, which were adorned with massive horns and a thick hide. The meat of the Longhorns was not considered choice by most connoisseurs, but these cattle could travel long distances, go without water for days, and resist many infectious diseases that would lay low cattle of other breeds.

Most cattle drives followed along the path of a number of trails from Texas through the Indian Territory (present day Oklahoma) into Kansas.   The most famous of the trails was the Chisholm Trail, named after Jesse Chisholm, a trader of cattle and other goods with outposts along the North Canadian River in northern Texas and along the Little Arkansas in southern Kansas. The drives ended in a variety of Kansas towns, notably Abilene, after some entrepreneurial cattle buyers, such as Joseph McCoy and his brothers, promoted the obscure train stop as a place where Texas cattle could be shipped by rail to market.[2] The cattle drives had emerged as an entrepreneurial solution to desperate circumstances where economic gains were blocked by geographic, technological, and legal obstacles.

The cow towns grew rapidly in size and prosperity, although many faltered after the cattle drives ended. The cattle and cowboys were not always welcomed. Many Kansas farmers and homesteaders believed that the Longhorns brought diseases such as “Texas Fever” that would infect and kill their own cattle. The disease known today as Babesiosis was caused by parasites carried by ticks that attached themselves to Texas steers. The Longhorn cattle had developed an immunity to the disease, but the northern cattle had not. The ticks on the hides of the Texas cattle often traveled to the hides of the livestock in Kansas, with lethal results.[3]   The Kansas farmers demanded and gained a number of state laws prohibiting the entry of Texas cattle. These laws were circumvented or simply weakly enforced until the 1880s. At first glance, these laws might appear to conflict with the commerce clause of the U.S. Constitution, Article I, Section 8, Clause 3, which authorized Congress, not the states, to regulate commerce among states. Yet, the federal Supreme Court ruled in 1886 in the case of Morgan’s Steamship Company v. Louisiana Board of Health that quarantine laws and general regulation of public health were permissible exercises of their police powers, although they could be preempted by an act of Congress.[4]

The cattle drives faced many hazards on their long treks to the north.   Harsh terrain, inclement weather, hostile Indians, rustlers, and unwelcoming Kansas farmers often made the journey difficult.   Nevertheless, for about twenty years the trail drives continued and were mostly profitable. Even after the railroads reached Fort Worth, Texas, many cattlemen still found it more profitable to make the long journey to Kansas to ship their beef. Cattle prices were higher in Abilene, and the costs of rail shipment from Fort Worth were, at least in the 1870s, too high to justify ending the trips to Kansas.[5] Eventually the drives did end, although there is some dispute among historians about when and why the cattle drives ceased. By the 1880s, barbed wire fencing blocked the cattle trails at some points. The new railheads in Texas offered alternative routes to livestock markets. Finally, Kansas enacted a strict quarantine law to keep out Texas cattle in 1885. Of course, past quarantine laws had been weakly enforced. State officials seemed to take the 1885 law more seriously. Perhaps economic incentives encouraged stricter quarantine enforcement. The cattle herds of the northern plains had been growing gradually over the years. After the Battle of Little Bighorn in 1876, the United States Army largely pacified hostile tribes in the Rocky Mountain states, with the result that the cattle industry thrived in Wyoming and Montana. With bigger and more carefully bred livestock available to the Kansas cattle buyers, the need to buy Texas cattle diminished. Enforcing the quarantine laws became less costly to the cattle traders and certainly pleased many of the Kansas farmers who voted in state elections. The end came relatively abruptly. In 1885, approximately 350,000 cattle were driven from Texas to Kansas. The following year, in 1886, there were no drives at all.[6] The cattle drives had emerged in the 1860s as an entrepreneurial solution to desperate circumstances where economic gains were blocked by geographic, technological, and legal obstacles. In the 1880s, the marketplace had been transformed. New barriers to the cattle drive had appeared, but by then the cattlemen in Texas had safer and more cost-effective  means to bring their livestock to market.

December 6, 1865: The Thirteenth Amendment to the U.S. Constitution is Ratified,...

October 18, 1867: Signing of the Alaska Treaty, The Alaska Purchase
Scroll to top