Let’s start with the simplest symbol that every kid knows – the flag. The flag is the symbol of our nation. It’s what we identify with as Americans.  There’s great flag information and history at this site: http://www.usa-flag-site.org/history.shtml

Betsy Ross, a 24-year-old widow and upholsterer, is credited for sewing the first flag in May 1776 although there is no historical record of this – more of a legend. 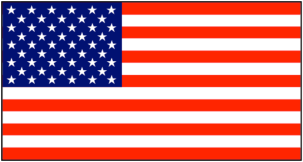 Here are some of the questions inspired by the old INS Citizenship Test to ask the club members – try to get them to answer without looking at a flag, if possible:

1)     What colors are on our flag? (Answer: Red, White and Blue. Red for Hardiness and Valor, White for Purity and Innocence, Blue for Vigilance, Perseverance and Justice, according to http://www.usa-flag-site.org/history.shtml – If you need a dictionary for these words, grab one for the group or check out www.dictionary.com)

3)     What color are the stars? (Answer: white – The white on blue was to represent a New Constellation in our skies, The United States)

7)     What do the stripes represent? (Answer: the 13 original colonies or states)

10)  What are some of the things you NEVER do with a flag? (Answers: don’t let it touch the ground, let it get rained or snowed upon (unless made for that), left in the dark (always light it at night), used for decoration, used on clothing or advertising materials, flown upside down unless specifically as a sign of distress, used to carry things)

11)  What’s the name of the national anthem? (Answer: The Star-Spangled Banner, by Francis Scott Key in 1814) Here are the words: http://www.usa-flag-site.org/song-lyrics/star-spangled-banner.shtml – the group leader can print these or just read them and the group can talk about what it means. Here’s a video from David Barton’s Wallbuilders about the Star-Spangled Banner: http://www.youtube.com/watch?v=zDKfw8nysLA (7:45 – can watch together)

As a group, they can either draw their own flag, design a flag for themselves, their family or their class/team. Alternatively, it would be nice to talk about the state flag of where they live as well. Here’s a resource for that:  http://www.50states.com/flag/

At the end, the moderator can randomly ask some of the questions again and see if the kids remember. You can also print these pages for them for their patriot notebook to have as reference.

Vocabulary Lessons for the Constitution’s Article I (Legislative Power)

Take a few minutes and divide up these words with the group – maybe write them on pieces of paper and let everyone draw from a basket or jar enough so the slips of paper are divided semi-evenly.

Read the list so everyone understands how to pronounce their word(s).

Everyone will need a dictionary or their phone with an app on it to look up the meanings. Give everyone 10-15 minutes to find these words and make up their sentences. One definition for each is probably sufficient.

Besides the meaning, encourage everyone to try and use these in a sentence that actually makes sense. Have the group decide if they think the sentence helps understand the word better. Maybe have the participants trade their definitions with a partner and each read the other’s to see if they make sense.

Offer a prize or reward for the funniest sentence, the most descriptive, the most creative.

Legislation – 1. the act of making or enacting laws. 2. a law or a body of laws enacted.

Apportioned – to distribute or allocate proportionally; divide and assign according to some rule of proportional distribution: to apportion expenses among the three men.

Impeach – 1. to accuse (a public official) before an appropriate tribunal of misconduct in office. 2. Chiefly Law . to challenge the credibility of: to impeach a witness. 3. to bring an accusation against. 4. to call in question; cast an imputation upon: to impeach a person’s motives. 5. to call to account.

Compel – 1. to force or drive, especially to a course of action: His disregard of the rules compels us to dismiss him. 2. to secure or bring about by force. 3. to force to submit; subdue. 4. to overpower. 5. Archaic . to drive together; unite by force; herd.

Treason – 1. the offense of acting to overthrow one’s government or to harm or kill its sovereign. 2. a violation of allegiance to one’s sovereign or to one’s state. 3. the betrayal of a trust or confidence; breach of faith; treachery.

Duties – 1. something that one is expected or required to do by moral or legal obligation. 2. the binding or obligatory force of something that is morally or legally right; moral or legal obligation. 3. an action or task required by a person’s position or occupation; function: the duties of a clergyman. 4. the respectful and obedient conduct due a parent, superior, elder, etc. 5. an act or expression of respect.

Imports – 1. to bring in (merchandise, commodities, workers, etc.) from a foreign country for use, sale, processing, reexport, or services. 2. to bring or introduce from one use, connection, or relation into another: foreign bodies imported into the blood; foodstuffs imported from the farm.

Excises – 1. an internal tax or duty on certain commodities, as liquor or tobacco, levied on their manufacture, sale, or consumption within the country. 2. a tax levied for a license to carry on certain employments, pursue certain sports, etc.

Naturalization – 1. to confer upon (an alien) the rights and privileges of a citizen. 2. to introduce (organisms) into a region and cause them to flourish as if native. 3. to introduce or adopt (foreign practices, words, etc.) into a country or into general use: to naturalize a French phrase.

Letters of marque – license or commission granted by a state to a private citizen to capture and confiscate the merchant ships of another nation. This appears in Article 1, Section 8, Clause 11 about the powers the Legislature will have.

Writ of habeas corpus – a writ requiring a person to be brought before a judge or court, especially for investigation of a restraint of the person’s liberty, used as a protection against illegal imprisonment. Literally – “Have the body”

Bill of attainder – an act of legislature finding a person guilty of treason or felony without trial. Here’s a good legal definition: http://www.techlawjournal.com/glossary/legal/attainder.htm – Article I Section 9 paragraph 3 outlaws this. It’s basically trial by legislature instead of by the judicial branch.

Ex poste facto law – Laws that provide for the infliction of punishment upon a person for some prior act that, at the time it was committed, was not illegal. Also specifically outlawed in Article I, Section 9 paragraph 3 of the Constitution. Another good explanation: http://legal-dictionary.thefreedictionary.com/Ex+Post+Facto+Laws – This and the bills of attainder were meant to protect people from abuses of power and give them the power of due process of the law.

Emolument – profit, salary, or fees from office or employment; compensation for services. Found in Article 1, Section 6, Clause 2 (Ineligibility clause) regarding the House members can’t also serve in the Senate at the same time.

Mnemonic for Remembering the Articles of the Constitution

A mnemonic is a phrase to help you remember the order of things or a simple list of things. Example: HOMES is the mnemonic for the Great Lakes – Huron, Ontario, Michigan, Erie and Superior. Another one: My Very Educated Mother Just Served Us Nine Pickles (the order of the planets before Pluto got deomoted – Mercury, Venus, Earth, Mars, Jupiter, Saturn, Uranus, Neptune, Pluto.)

So, let’s make up our own mnemonic for remembering the Articles of the Constitution (different from the Bill of Rights, of course). Here they are:

A book by Douglas M Rife and Gina Capaldi called “The Constitution A Comprehensive Guide to Understanding the Constitution and Its Impact on the United States of America,” suggested Loud Elves Jingle Sleigh bells And Shout Raucously.

Can you think of one? How about “Leah, Elizabeth and Jessica Sat Around Singing Rock and roll”

As a group, take about 10 minutes and let everyone play around with some sentences then take turns reading them outloud.

Maybe award a prize or a certificate for the one that the group thinks is the funniest, easiest to remember, most creative, etc.

Have fun! What else can you think of mnemonics for? Bill of Rights? The Founding Fathers? Get creative.