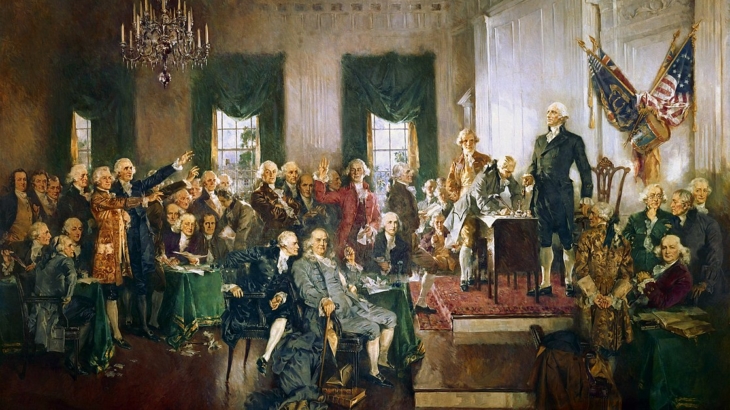 Shay’s Rebellion was a “wake-up” call for all Americans. The armed closure of a duly constituted court was a drastic step. But these were drastic times. The war with Britain, though favorably concluded for the Americans, had left the economies of the states in shambles. The Confederation Congress found itself powerless to intervene. By the summer of 1786, farmers were unable to find a market for their crops or meet their tax obligations; without hard cash they were unable to make their mortgages or loan payments. The courts, with little recourse but to uphold the law, were foreclosing on farmers who only a few short years before had been fighting for their country’s independence. On August 31, 1786, ex-Revolutionary War Captain Daniel Shays, now himself a bankrupt farmer, lead an armed mob to the Northampton, Massachusetts court and forced it to close. But Massachusetts was not alone: Pennsylvania’s James Wilson observed that “The flames of internal insurrection were ready to burst out in every quarter.”  Mutinies of soldiers in New York, New Jersey and Pennsylvania fed the anxiety. Political cartoons began to appear in American newspapers mocking Congress. Leading men began calling for amendments to, or even replacement of, the Articles of Confederation.

In April 1786, Rufus King wrote to Elbridge Gerry: “We are without money or the prospect of it in the Federal Treasury; and the States, many of them, care so little about the Union, that they take no measures to keep a representation in Congress.”[i]

Three years before, Henry Knox had complained to Gouverneur Morris: “As the present Constitution is so defective, why do not you great men call the people together and tell them so; that is, to have a convention of the States to form a better Constitution.”[ii]

Finally, the pleas for change were heard, there would be a “Grand Convention” to “fix things” once and for all. Alexander Hamilton and James Madison were elated. Their quiet work behind the scenes had paid off.

In Hamilton’s view “The fundamental defect is a want [lack] of power in Congress.”[iii] He had tried numerous times to have the Articles amended, to no avail. George Washington complained of “a half-starv’d, limping Government.”[iv]

Madison was determined not to waste the opportunity the convention afforded. First, he would place the Articles under his scholar’s microscope and identify each of its defects. Madison was in a unique position to undertake this analysis: he had represented Virginia from 1780-1783 in the Confederation Congress and had seen from that vantage its inherent weakness. Following this, he had served the next three years in the Virginia Assembly, seeing the problems caused by the Articles from that perspective. Returning once again to a seat in the Confederation Congress in the Spring of 1787, Madison sat down at his desk before setting out for Philadelphia and wrote “Vices of the Political System of the United States.” These would become the “cautions” that a new government must avoid. Hopefully it would become a government actually empowered to govern.

All but the last of the twelve “bullet points” Madison set down in “Vices” were accompanied by elaborating commentary. For instance: “Failure of the States to comply with the Constitutional requisitions,” the first complaint, was explained as an “evil” which “has been so fully experienced both during the war and since the peace, [which] results so naturally from the number and independent authority of the States and has been so uniformly exemplified in every similar Confederacy, that it may be considered as not less radically and permanently inherent in, than it is fatal to the object of, the present System.”

While Madison was careful to identify the “effects” of the deficiencies of the Articles, he did not focus on its numerous structural defects:

All of these defects were corrected in the new Constitution.

The standard meme today is that the Articles were discarded in their entirety and a “brand-new” document substituted. But while the structure of government adopted at the Grand Convention was indeed new, not every feature of the Articles was abandoned; the following clauses and provisions were retained, some nearly verbatim:

At the Virginia Ratification Convention on June 5, 1788, Edmund Pendleton would sum up the Articles thusly: “Our general government was totally inadequate to the purpose of its institution; our commerce decayed; our finances deranged; public and private credit destroyed: these and many other national evils rendered necessary the meeting of that Convention.”

The genius of fifty-five “demigods” would find solutions to the various defects of the Articles of Confederation, would create the “more perfect union” the men sought and that America deserved, yet all this genius depended on one final institution: a virtuous people. As John Adams reminds us: “Our Constitution was made only for a moral and religious people. It is wholly inadequate to the government of any other.”[v] If this constitutional republic is to survive, if the republic is to be “kept,” the result is in the hands of “We the People.”

[v] To the Officers of the First Brigade of the Third Division of the Militia of Massachusetts, October 11, 1798.

Articles of Confederation, Designing a United States Constitution, and Empowering...